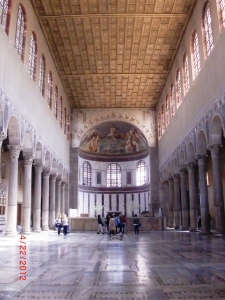 It’s been chilly with intermittent rain but Tuesday morning the sun seemed promising, appearing suddenly from behind cumulus clouds that floated through the skies. We headed for the Aventino, a leafy district of Imperial Rome that looks over the river from its hilltop, today home to ancient house churches, basilicas, monasteries, and quiet cypress-lined lanes.

First we visited fifth-century Santa Sabina, built over a house church, the mansion belonging to the matron Sabina in the fourth century. The church retains its ancient basilica style, open and long, with the choir enclosed at the head of the nave. Often when we have visited in the past chairs filled the space, but this morning the nave was empty. We stepped slowly over the marble floors to the enclosed choir, then along the side aisles lined with giant fluted columns. Time seems to collapse here, where the high clerestory windows allow angled and limited light, and draw the eye upwards. Earlier, outside, we had heard children playing in a school yard, their shouts mingling to form an exuberant and raucous chorus across the street, but inside now all was silent. The quiet padding of my shoes was the only sound that broke the silence. I recalled fondly the scenes set here in my first novel, Pilgrimage, and visiting Santa Sabina was like visiting an old friend. The Dominicans are in residence here, and it was here that St. Dominic met St. Francis. They have an excellent gift shop in the adjacent building with icons and medals and candles for sale.

Alessio under the stairs, in the north aisle near the entrance. Tradition says that Alessio was the son of a wealthy family in the Aventino. He left his home to become a humble beggar, traveling as far as Edessa, Turkey. When he returned, no one recognized him, and he lived under an outside staircase. When he died, his parents found his story on a paper clasped in his hand. The story touches me, for it is about exile, humility, family, and with today’s broken families, broken by geography as well as belief, it was a familiar one.

We walked up the side aisle. The back garden was open, and from its terrace you can see St. Peter’s across the river, far beyond the red roofs of Rome. The crypt was open as well, and we descended irregular steps to the dim tenth-century sanctuary, haunting with frescoed figures on the walls peering at us intruders. Relics of Saint Thomas Becket sanctify the altar, aligned under the high altar above. Returning to the nave, I prayed an Angelus before the beautiful Madonna of Edessa, her icon blessing the north aisle.

We walked on to San Anselmo, a Benedictine monastery (they sing Gregorian chant 9 a.m. Sundays), but only had a moment to look into the spotless and shiny marbled interior, then bought some Trappist chocolate in the adjacent shop. The shop is also well stocked with icons, honey, olive oil, and other products made by the Trappists in Rome.

We were watching the time, for most churches close at noon for a few hours, and it was getting close to noon. We headed back to the path adjacent to Santa Sabina’s orange garden (the garden has wonderful views of Rome as well) and followed the cobblestones down to the river. We crossed the busy intersection (the Boca della Veritas is nearby), and walked along the river up toward Isola Tiberina and San Bartolomeo. 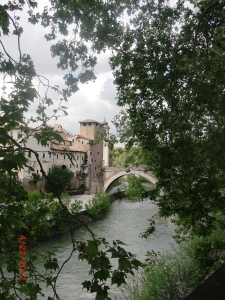 Isola Tiberina from the river path

It’s a lovely walk when the sun is out, the light filtering through the arcade of poplars that line the river path. The river was high this year – they’ve had lots of rain – and peering over the embankment, the greenish waters were rising over the lower walkway. Soon we came to the old footbridge that led to this charming island in the center of the Tiber.

Isola Tiberina houses a hospital, a restaurant, perhaps a hotel (?), and the ancient church of San Bartolomeo, now cared for by the Community of San Egidio, a new evangelical Catholic group dedicated to the poor.

We arrived in time (now after noon), for the church was still open. We entered

and paused at the foot of the central aisle. A dark ark, a boat-like reliquary, houses the relics of Saint Bartholomew, the Apostle, thought to be the same as Nathaniel. The ark has been turned into an altar, and it sits in its humble earthiness in the chancel, with several icons surrounding it. We stepped up the the altar and genuflected, then turned to the right to the south transept chapel to visit a stunning Madonna and Child. I said another Angelus, thinking a host of Madonnas were now praying for me. I find it so touching that there are so many different Madonnas in Catholicism, so that she may reach many nations and many individuals with unique desires and sufferings.

As we crossed the Pont Fabriccio back to the mainland, and as we stepped along the dappled path bordering the river, we thought it was just about time for lunch. It had been a good morning, a morning of sun and old stone and pondering the past made present by these amazing churches.