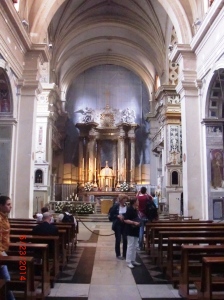 The Church of Santissima Trinita dei Monti commands a magnificent view of Rome, located at the top of the Spanish Steps. But inside you can hear the Brothers and Sisters of Jerusalem sing the Psalms in a glorious Renaissance Baroque church where they are now in residence.

We first heard them sing their prayers in Vezeley, France, and often in Paris at St. Gervais near the Hotel de Ville and Notre Dame on the river. They are young, for the most part, men and women who work part time, rent their own accommodations. They gather for meals and to sing the ancient monastic offices. They are assigned a church to care for and to give a public presence to their prayers. Their mission is to pray for the city. They are now also located in Strasbourg, Florence, Mont St.-Michel, Brussels, Montreal, Rome, Magdala (France), Tarbes (near Lourdes, France), Cologne, Gamogna (Italy), Pistoia (Italy). 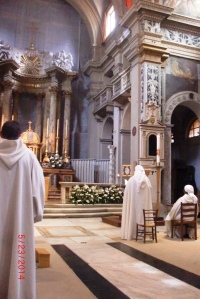 When I heard they were in Rome I knew we would visit to hear them sing the noon prayer office at 12:30. These prayer times originated in the earliest days of monasticism, when a 24 hour cycle was kept, consisting of seven “offices.” They usually form a thirty minute pattern with singing of the Psalms (in the local language), readings of Scripture, a short homily, intercessory prayers (often sung as well), and praise prayers (sung.) Today one can hear various communities sing the morning, noon, and evening offices. Some sing more – the Augustinian nuns at Quattro Coronati sing five or six offices a day, open to the public. They welcome visitors who keep the silence. Many offer booklets to follow along and join in.

I have always found the half hour a happy one, a time to gather myself together once again before God, a time to pray for my family and those I know who are sick (one friend in the last stages of cancer) and to pray for those who have asked for my prayers. I try and think of those who are needy and unhappy and for whom the Holy Spirit wants me to pray. I try to listen to God’s voice during these blissful moments as the ethereal sounds of the song-prayers fill my ears. 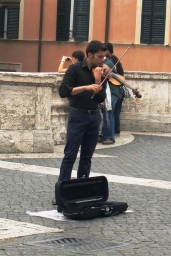 I was particularly thankful for their presence in Rome, and within walking distance from our hotel. We stepped into the bright gracious nave and found seats in the first pew. Soon the white-robed men and women took places on kneelers and pads before the altar, and began to sing. The sound is like larks singing, but with a depth provided by the men’s harmonies, and I often think Heaven might be like this – the praising of God for all he is and does, through whom we live and have our being. I hope so. 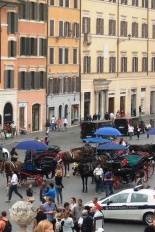 It had rained during the night, and the skies were gray when we had entered, but the sun came out when we left, and we carefully made our way down the Spanish Steps, past a violinist, for soup and salad at Babington’s Tea Shoppe, across the street from the house of Keats and Shelley.

Later in the afternoon, we stopped by the American Church of Santa Susanna and learned they were closed for restorations, but the library was open. I left a copy of The Magdalene Mystery and chatted with the ladies running a book sale. I explained that the story took place in part at Santa Susanna’s and they were intrigued. It was a story about truth and lies, I said, and the historical evidence we have that supports the Gospel accounts that it was the risen Christ and not a gardener that appeared to Mary Magdalene that first Easter morning. They nodded graciously, probably wondering at this chatty American.

The Fraternities of Jerusalem: http://jerusalem.cef.fr/