On Masses and Miracles 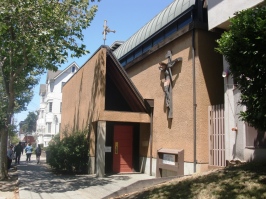 ething happens in the Mass.

It has been a long time since I attended daily Mass for two weeks. True, I missed one Monday, and both Saturdays, but my grand total for the period July 17-31 was 12. Not that I was counting.

I’ve often thought that the Mass changed a person, outside and inside, body and soul. We are taught in the Anglican tradition that the bread and wine are the mystical body and blood of Christ. We are told that Christ enters the body when we receive the Eucharist. And with his entering of all the communicants at the altar, we experience a family forming the Body of Christ, one that is both physically and spiritually real. Even so, after fifty years of Eucharists, in some ways I believe this more, and in some ways I take this miracle for granted.

Many churches have liberalized and diluted this belief, as though embarrassed, as though Christ’s words in John, Chapter 6, verses 53-58, don’t exist. But our own Anglican Province of Christ the King (traditional Episcopalian) believes those words:

53: Then Jesus said unto them, Verily, verily, I say unto you, Except ye eat the flesh of the Son of man, and drink his blood, ye have no life in you.
54: Whoso eateth my flesh, and drinketh my blood, hath eternal life; and I will raise him up at the last day.
55: For my flesh is meat indeed, and my blood is drink indeed.
56: He that eateth my flesh, and drinketh my blood, dwelleth in me, and I in him.
57: As the living Father hath sent me, and I live by the Father: so he that eateth me, even he shall live by me.
58: This is that bread which came down from heaven: not as your fathers did eat manna, and are dead: he that eateth of this bread shall live for ever.   (KJV)

Many left him then because of those words, and many leave him today. They are, to be sure, revolutionary, astonishing words. Hard words. But our Anglican Church believes them, believes he meant them to be true.

And so we teach our postulants for Holy Orders that this is true. We act out this belief with daily Eucharists offered in residential programs at St. Joseph of Arimathea Chapel in Berkeley, the most recent session having just ended. The Noon Mass was open to the public, so I went.

I didn’t always feel like going. I had to give up my time. But to be fair, my time isn’t mine. It’s a gift, a loan from God. I have no regrets that I attended daily. My only regret is that I missed one – for a good reason – but nevertheless I missed it.

Sometimes I look back on my sixty-nine years and wonder how much of it I wasted, not listening to God’s promptings, but plunging ahead with my own ideas, my own plans, my own use of my own time, my, my, my….

So each day I arrived early to this beautiful, haunting, intimate chapel, one block from UC Berkeley. I set out a sign announcing the special Mass that day. I lit candles before the Virgin Mary icon, so that bright flames led the eye upward, up to her comforting image, holding the Christ Child. I prayed an Ave Maria. Occasionally visitors peered in, exclaiming they didn’t know this stunning chapel was here, right on the corner of Durant and Bowditch. Some stayed for the Mass. Some lingered, then moved on. Would they recall the powerful peace in this sacred space of red tiles and barrel-vaults, the austere beauty of the chancel and the white-draped altar, the primitive wooden crucifix above, the massive pipe organ in the back? 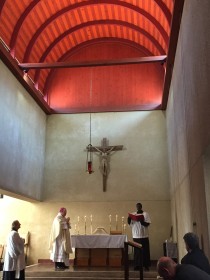 The organ is played on Sundays. It wasn’t played in the weekday Masses, but then we had melodious singing. The postulants, discerners, and clergy, robed in black, entered in silence, into the silence, and took places along benches lining the walls. Rug squares served as kneelers on the polished tiles. As the Mass danced its way through the Lessons, Creed, Absolution, Offering, Consecration, and Communion, the congregation sang responses, sang the Gloria and the Creed, sang hymns with one voice or in harmony. There were quiet “said” Masses too, spoken only, Masses mourning recent Christian martyrs, words full of reverence and love, and longing for a world at peace not war. And each Mass, celebrated by a different priest, was unique, reflecting the celebrant’s unique manner and character.

Looking back at all those liturgies, I don’t believe I noticed a great change in myself, body or spirit, until the two weeks drew to a close. But toward the end of the second week, I found I slept more deeply, prayed more clearly, and best of all, was filled with a curious bright certainty. I had spent an hour each day outside myself, offering myself, more self-less, allowing God to heal me by living within me. It was and is as though there was a change in my body and soul, perhaps producing St. Paul’s immeasurable riches of God’s grace, bringing to mind the last line of the Te Deum Laudamus.

The Te Deum Laudamus, an ancient prayer praising God and part of our Order for Morning Prayer, is said to have been sung by St. Ambrose in the Milan Cathedral as he raised St. Augustine from the baptismal pool, Easter 387 AD. Augustine sang too. The last line reflects my heart: “O Lord, in thee have I trusted; let me never be confounded.”

I don’t like the feeling of being confounded. Nobody does I suppose. Confusion, disorder, and division are not the works of light, not the ways of God. They cause us to “groan and travail in pain” (again St. Paul). They cause insanity, war, and hate. But in the Mass, all is sane, orderly, and united in love. The beauty is seamless like the garment at the foot of the Cross. We enter the church’s sacred space confounded by the world and leave no longer confounded. We enter with divided hearts and souls, and leave as brothers and sisters. We enter as many and leave as one. We enter, propelled by duty and commanded by love, and leave trusting God once again. Why is that? Because we leave with him in us. We pray in the Mass, that “our sinful bodies may be made clean by his body, and our souls washed through his most precious blood, and that we may evermore dwell in him, and he in us.”

We are cleaned and washed, made ready for Christ’s indwelling presence.

A friend of mine is confined to a wheelchair. He arrived at the Noon Mass confounded by the works of the City of Berkeley who had removed the sidewalk in front of our chapel in preparation for repaving. He waited on the street, barred by the disturbing curb, and looked around. I stepped outside, keeping watch. Two workers eyed the wheelchair. I eyed them, then eyed a pile of plywood. “Could you make a ramp for him with the plywood?” I asked as nicely as possible. They looked slightly confused, but then jumped to it. Soon they had laid a bridge over the river of churned dirt. My friend drove his chair to the door, grinning. “I don’t give up easily,” he said. “I noticed,” I replied happily. I think we will call this the “Miracle of the Bridge over Troubled Sidewalk.”

With his broken body imprisoned in his chair, my friend is a walking, er, rolling, testimony to the power of faith. He rings the Sanctus bells in the Mass. He prays the Our Father, the Gloria, and the Nicene Creed as though he means it, distinctly, proudly, forthrightly and righteously a part of Christ’s Body. For Christ does indeed dwell in him, in me, in all of us who partake of the Eucharist.