I’ve been memorizing a prayer suggested by our Bishop Hansen. This week I repeated, whenever I had a spare moment: “Lift, O God, any veil from our minds and bring revelation and enlightenment in all things. Amen.” I also repeated last week’s line: “Let all of us, all our children, our children’s children, and our future generations know Christ fully and enter Thy Kingdom now to live with Thee forever.”

I want the words to be engrafted in my memory, for they can be called upon in times of sorrow and doubt. I have found that memorizing, while never an easy discipline, is worth the effort. But I have to recall the words regularly – as one does in the weekly liturgy of the Mass – or they will suffer from lack of watering as seeds thrown upon poor parched soil. For if I water the words with my memory, I am fed in return with a bountiful crop of truth.

Memory ensures that truths we hold are kept alive with each generation. Such truths keep us alive in turn, shining light on darkness and directing our way when choices loom before us. 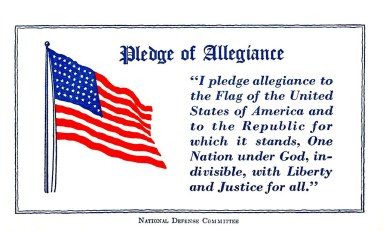 We memorized many things in school over the years, Kipling and Frost and Shakespeare, but the Pledge of Allegiance seeded and watered belief in our country’s righteousness and freedom.

“I pledge allegiance to the flag of the United States of America, and to the Republic for which it stands, one Nation under God, indivisible, with liberty and justice for all.”

I recall standing and reciting this every day in school in the ‘fifties, hand over heart, from a young age, the entire class turning to face the flag. We sat in rows then, like a fleet set sail for a common destination. Today students often sit in “pods,” or small groups, and with this move, the teacher becomes less the focus, less the authority, and more of a coordinator and equal.

They were small changes, it seemed, yet with vast implications. Instead of seeing ourselves as empty vessels to be filled with knowledge, we were taught how to find it on our own. Truth slipped into opinion. Self-esteem was paramount, and discipline disdained.

My classmates and I grew up knowing that America was a good country, not perfect, but good in terms of her ideals. My co-pledgers then and earlier, defended our nation – and the West – in Europe, the South Pacific, Korea, Vietnam, the Middle East. They gave their lives, or were willing to, to protect “liberty and justice for all.”

What would become of a sports game where rules could be ignored? The rules are put in place for a reason, so that all can share in the game in a peaceful manner.

Just so, laws that are unenforced, or enforced unequally depending on race or power or influence, deny citizens the equal chance to play the glorious game of America. In time, without law and order, it seems a waste of time to even try to compete. Why should one try when others cut in line, when others are favored? In time, allegiance to country and allegiance to this greater good, fades, and anger leads to depression.

But some of us remember a time when remembering was a good. We remember a time, re-member or put together again in our minds, when history, the story of the past, was considered vital to a culture enduring another generation. We learned where we had come from so that we could know where we should go. Our country, we learned, was founded by pilgrims desiring religious freedom. Our country, we learned, was birthed in the chaotic meetings of minds to agree upon principles, principles that would be declared worth fighting King George, worth dying for. Our declaration declared that

“We hold these truths to be self-evident, that all men are created equal, that they are endowed by their Creator with certain unalienable Rights, that among these are Life, Liberty and the pursuit of Happiness.”

As school children, we learned these self-evident truths, writing these truths on our hearts.

And so today, we thank those who died for us. We thank those who left family behind and suffered for us. We remember them, for they were candles in the darkness of anarchy and tyranny. They knew without truths we agree upon to be self-evident, truths from our Creator, anarchy would ensue, followed by tyranny, a historical lesson for anyone who desires to learn from the past.

This week I will add the third verse to my memory prayer:

3. May Thy Holy Spirit cover and protect us daily, with mighty angels and the prayers of saints.

Today is Ascension Sunday, when we celebrate Christ’s bodily ascension to Heaven, after his many appearances on Earth in his resurrected body. Jesus leaves his devoted disciples, we are told, so that he can send his Holy Spirit to strengthen and comfort, to free from sin, to guide and protect. And so it happened. The Western world – Western Civilization – was born of Christianity, sculpted in the Judeo-Classical world, leading humanity toward love and law and equality, to freedom of worship, finally sending the Pilgrims to our shores.

For we are a nation under God, protected by his Holy Spirit, with angels and saints. Never in the history of man has there been a nation like America. Never has their been a more resilient people than Americans. And never has there been such a light shining on such a hill, a beacon of truth to the world.

May America continue to welcome those who share her ideals, those who remember who she is, and those who will defend her.

May we always pledge our allegiance to America, to liberty and justice, under God.