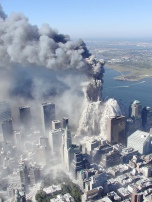 This last week we recalled the September 11, 2001 attacks on American soil. As we mourned our dead and honored our heroes, waves of migrants fleeing oppression flooded into Western Europe. 800,000 men, women, and children are expected in Germany this year. It is a vast humanitarian crisis caused by Western benevolence.

America’s exceptional roots were planted by Christian Europeans, and the saplings, those thirteen colonies, grew strong, while the parent plant, Europe, declined. Europe has retained its own exceptional ideals of freedom, equality under the law, individual rights, and religious liberty. It even from time to time fought for those rights, that way of life Americans and Europeans have taken for granted.

Sometime after World War II, or perhaps earlier, Europe began to count on the protection of their American ally and ensure cradle-to-grave social programs for their citizens.

But America’s eviscerated military has left them (and us) exposed, leaving the Western way of life undefended. Now that we have become more like Europe in our national deficit, burgeoning state, and slashed military, who will protect us?

Bret Stephens writes in the Wall Street Journal how “We wanted a new liberal order – one with a lot of liberalism and not a lot of order. We wanted to be a generous civilization without doing the things required to be a prosperous one… the result is our metastasizing global disorder… openness is a virtue purchased through strength.” Every parent knows how painful yet necessary it is to practice “tough love.” Benevolence is not always good and often harmful.

Waves of desperate people are fleeing their homelands in the east. They are entering Hungary, Austria, and Germany; they are circling through Iceland and into Oslo. They are fleeing persecution, war, and poverty, looking for a better life. Peggy Noonan quotes the U.N. refugee agency when she says that they are coming from Syria, Afghanistan, Eritrea, Pakistan, Nigeria, Iraq, and Somalia. The majority are Muslim men.

Walter Russell Mead, professor at Bard College, writes in the WSJ of a “Crisis of Two Civilizations,” claiming that the Islamic worlds have tried and failed to create a workable society, so that the victims of the resulting tyrannies are fleeing into what they see as a prosperous and safe Western civilization. But the West no longer knows who it is or where it is going.

The Goths that crossed the Danube and conquered the Roman Empire didn’t find much resistance for the same reason. The Romans had become effete with a weak military. They didn’t know who they were or what to preserve and defend or why.

Professor Mead describes the crisis in Europe and the West:

Increasingly, the contemporary version of Enlightenment liberalism sees itself as fundamentally opposed to the religious, political, and economic foundations of Western society. Liberal values such as free expression, individual self-determination, and a broad array of human rights have become detached in the minds of many from the institutional and civilizational context that shaped them… Too many people in the West interpret pluralism and tolerance in ways that forbid or unrealistically constrain the active defense of these values against illiberal states like Russia or illiberal movements like radical Islam. (italics mine)

The Western world has a right to defend itself, its ideals and way of life, with military might. If nothing else, we must keep that defense at the ready, simply to assure the balance of power and peace in the world. American withdrawal from the mid-eastern theater in the last eight years has been a key factor in this current humanitarian crisis. We share the guilt with European governments who shy away from their own defense.

As we remember the Trade Center bombings, the Pentagon attack, and the plane crashing in the Pennsylvania field, those tragic attacks on American soil, we must face the unwelcome fact that the world has become less safe with all of our benevolence. It may be too late to teach our children the roots of freedom, so that they understand who they are and what they must defend, but we must renew our efforts.

We must encourage policies that ensure prosperity, capitalistic policies that grow the economy, so that we can afford a strong military that will keep the peace with its presence. Some experts say it is too late for Europe to wake up from their dream and rally a defense. Is it too late for America? The answer lies in the next election.